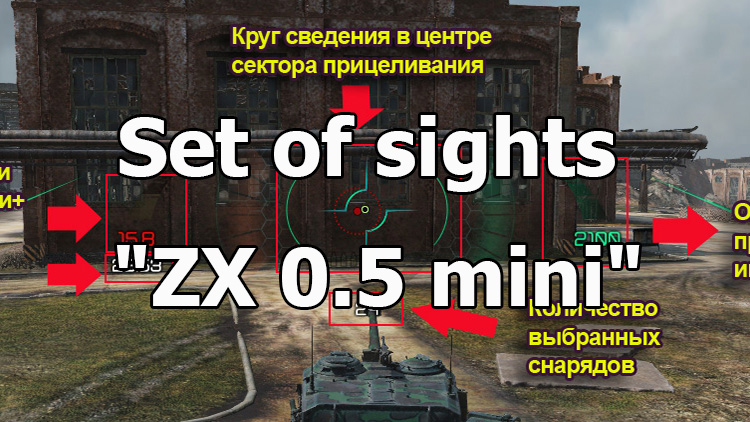 We continue to review the sights and this time to your attention a mini-version of the sniper-arcade set of sights “ZX 0.5 mini” for World of Tanks 1.19.1.0, which has a fairly good information content with minimal graphical saturation. 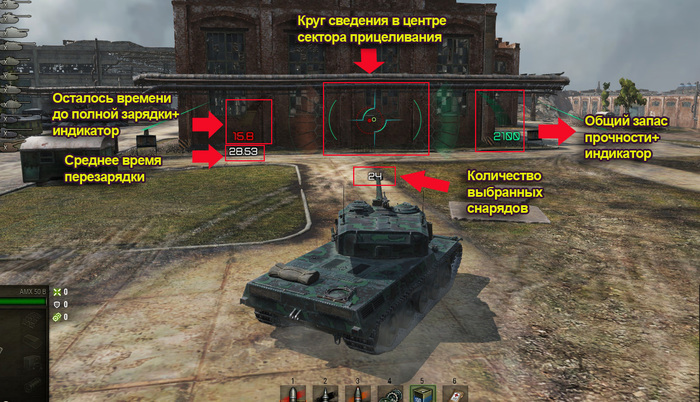 The circle of information in the center of the aiming sector is all the same old-good circle of information, only decorated in a blue border, and the crosshairs diagonally are supplemented with a quarter of a circle. Lets you see more clearly when the target is in your sector of fire.

The general margin of safety - has a double information design - on the one hand as the damage is received, the HP indicator will decrease, and on the other hand there is an HP counter that shows the real margin of safety of the tank in numbers.

There is time left before full recharge - by analogy with the previous component of the interface, this indicator also shows the reloading of the instrument as filling (color), but the recharge counter has the most informative value, which shows the numerical value, and also changes color (as a traffic light) as it charges. .

Average reload time - under this indicator is an indicator of the average recharge time, it allows the player to see the exact time of the full reload of the gun. 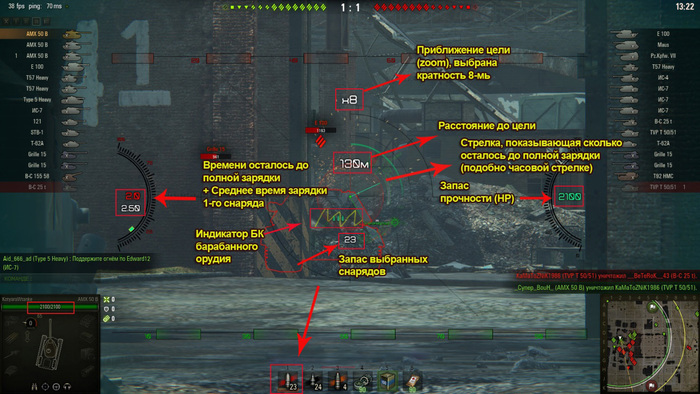 Despite the minimalism, this sight in the sniper mode reveals its full potential, do not be afraid of diversity, gradually understand and get comfortable with its potential.

Time left until full charge + Average charge time per shell - first of all, you should pay attention to digital indicators. The top one shows how much is left until the gun is fully charged, and the bottom one helps a lot to understand how much the average charging time is when you play drum tanks, in particular.

The Ammunition Indicator - shows how many projectiles are in the store / left, is very useful when playing tanks with magazine loading of guns.

The stock of selected shells - shows how many shells of the type that you currently selected.

The arrow, showing how much is left before the full charge - in fact, is a graphical display of the reloading process with a parallel to the side of the clock; as the arrow moves, it becomes clear how much is left until the gun is fully charged.

Safety factor - the digital value of the tank's HP reserve, changes as it takes damage, allows you to save time in battle and not look back at the damage panel.

Zooming in on a target (zoom) —Displays the multiplicity of the scope currently selected. 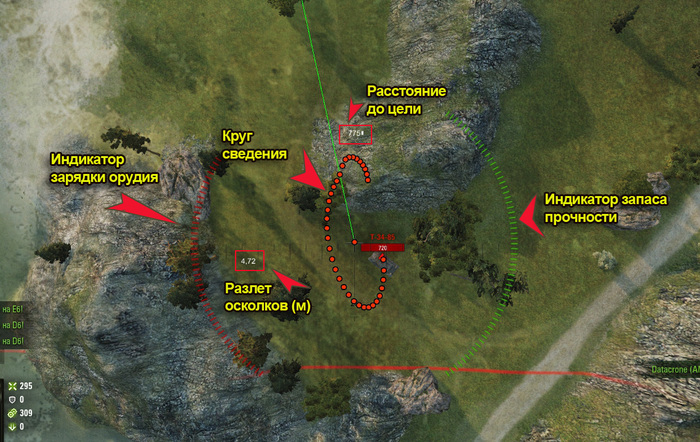 The safety margin indicator - with a full HP supply, this semicircle from the divisions is painted green, as the damage is received, the semicircle is reduced by changing the color.

The charge indicator - as it is filled, is colored red, works similarly to the previous example, it is only extremely dynamic, since recharging occurs much more frequently and repeats, unlike the loss of HP.

Fragment Scattering - shows the average radius of scattering of the fragments, so that you have an idea of ​​which sector the damage will apply to.

This type of "ZX 0.5 mini" sights can be classified as moderately saturated and at the same time quite informative. From myself, I note that the SPG-sight could be more multifunctional, for example, a pronounced circle of fragments scattering (instead of banal numbers) would not hurt, and the sniper scope would be slightly simpler, since additional graphic elements push it beyond the “mini-sight” - there is at least an average level. However, there are no special complaints about the arcade sight, it is also quite well balanced as “Jimbo” or “Taipan”, but the choice will depend on your personal preferences.