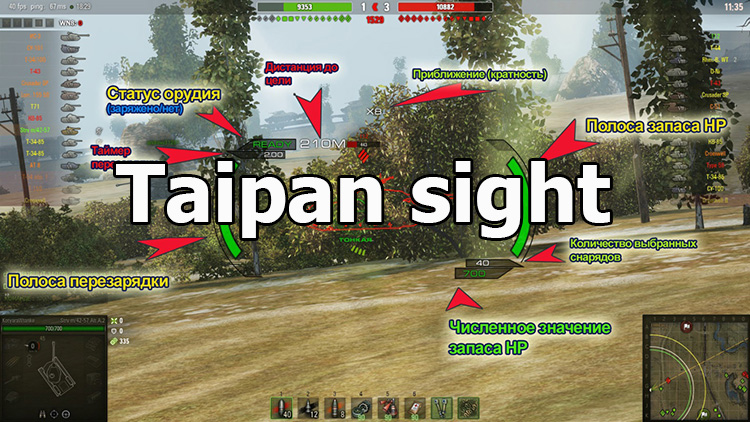 You have already familiarized with a number of WoT sights, which I described earlier, and today it’s time for a detailed description of another, and quite popular type of sights - Taipan sight for WOT 1.19.1.0, and it falls into the category of highly informative and has strong differences between the standard sniper scope and artillery.

We start with the most complex and intense - sniper scope, which is at least intuitive, but at first it introduces many players into a stupor, so let's try to figure it out.

This time, for better understanding, I broke the description into two pictures so that you could understand more clearly how the target behaves during the battle. 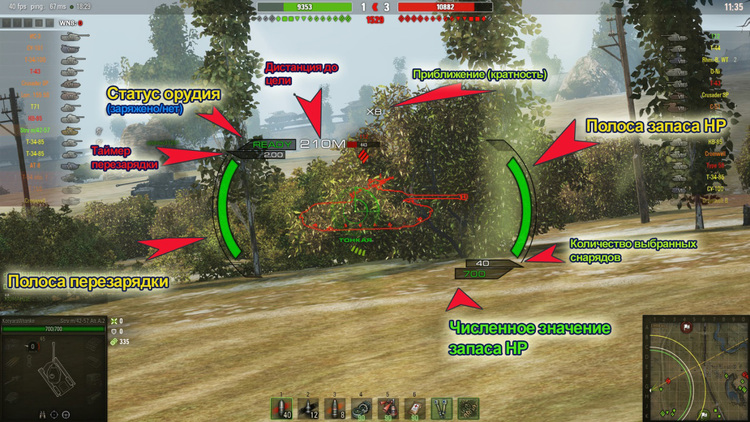 Recharge bar - works as an indicator, in the course of reloading it fills with color, and during charging you see a red color that rises up and changes its saturation and hue somewhat. When fully charged, the recharge strip takes on a green color.

Recharge Timer - serves as an additional source of information and an alternative to those who are used to working with numbers. It works similarly to the above, only you see numbers that change color as you recharge. When fully charged, it shows the reloading time as a whole (in the case of drums, first the reloading time of the projectile in the cassette, and only then the full time).

Gun status - complements the above and allows you to see what status the gun is in - charging, or charged, when fully charged, the inscription “Ready” appears.

Approximation (multiplicity) - all the usual "zoom", that is, approaching the goal, the main parameters of multiplicity - 4,8,16.

HP reserve bandwidth - Visually demonstrates how many strength points you have left, as they are lost, it changes color to alarming - red. The usefulness of this indicator is that it is always visible and protects such valuable seconds in tense moments of battle.

The number of shells selected - shows how many current types of shells are selected.

The numerical value of the stock of HP - if you are not satisfied with looking at the damage panel to see the stock of HP, or if you don’t have enough of the HP strip on the right side of the sight and you want to see the exact numbers, then this value will give them to you.

Note that under the center of the sight there is a cassette indicator, which clearly shows how many projectiles are left in the drum, which is very convenient for this type of tank. 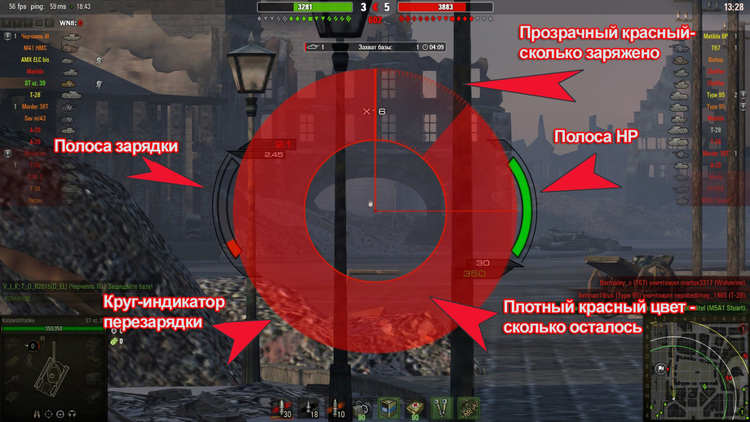 For a better understanding of the essence of the work of this sight in sniper shooting mode, consider another picture. We will not duplicate what has already been described above, but note the main differences.

Charging band (reloading) - as mentioned above, it shows how charged the gun is at the moment, dynamic indicator, and therefore we see that the gun is only the beginning of charging and the bar is filled only slightly and red (when fully charged it will turn green).

Circle recharge indicator - if you are uncomfortable looking at the side reload band, then this circle will show you how much is left until the next shot. Although, in my opinion, it is somewhat distracting from aiming, but for some it will seem more convenient than looking at the side panel or the digital hint. As it charges, it rolls back to 12 hours, like a normal color-filled watch.

Dense red color (segment or filling circle) - actually it shows how much is left before the recharge.

Transparent red - as this color is loaded, it becomes larger, which informs you about the quick charging of the gun, besides, the closer the charge, the more convenient it is to aim (since the filling with saturated red has passed).

The HP bar - as described earlier, it shows your supply of hit points.

The arcade type of sight somewhat resembles a simplified version of the sniper, which is quite understandable - in this mode we should see the battlefield, not the surplus of the interface. In general, if you have mastered the sniper scope, the understanding of the arcade will come by itself. 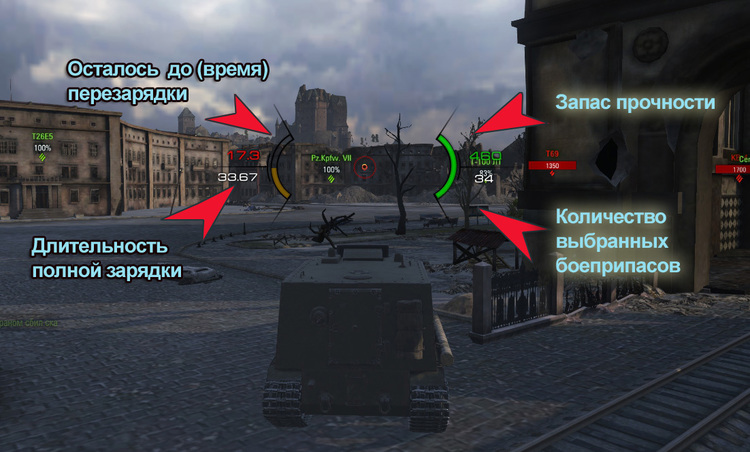 The duration of a full recharge is a digital indicator of the total reloading time of the gun, always visible and allows you to estimate the time needed for maneuver and exit for reloading.

It remains to recharge - a dynamic indicator that counts down the time before charging the gun and is synchronized with the side reload band.

Safety factor - the band and the nearby digital value of the HP stock of your tank (upper half of the side panel).

The number of selected ammunition - again, in order to better informative shows you how much a certain type of ammunition remains (which is currently selected).

This is where the authors showed an original approach and highly informative, so this is in this type of sight for SPG. Finding a more detailed version on the Internet is not so easy, but why - read below. 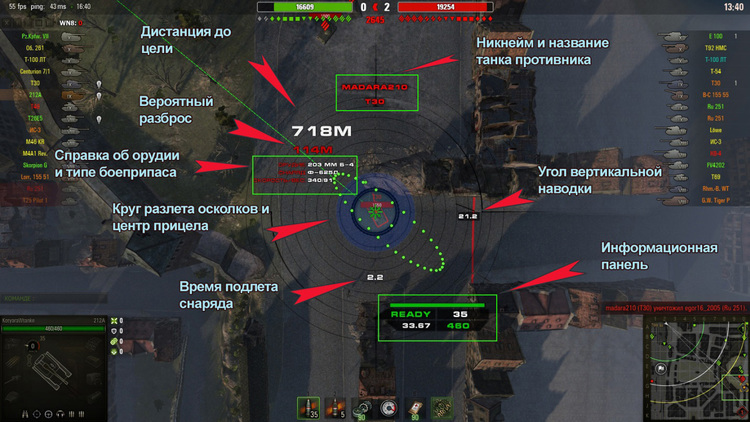 Probable variation - this digital indicator is immediately below the data on the distance to the target and shows how large the segment in which the projectile can fail to fly or fly the target.

The distance to the goal - shows how many meters to the object, which allows you to calculate both the distance and the probable approach time.

The time of the approach of the projectile speaks for itself, however, I would have made this indicator mainly and highlighted it in large print, because why should we focus on the distance if there is already a ready indicator for lead-through? - however, the authors pushed this figure into the background, but it is located at the bottom of the center of the sight and is clearly visible.

Nickname and name of the enemy tank - shows the player's name and the tank that you are aiming at. It helps newcomers to recognize tanks in the art-sight mode, as they lack experience to recognize them by contour.

The angle of vertical guidance - shows how much the instrument is rising at the moment, the usefulness of these data is doubtful, but for greater information, it will come down.

Information panel - if you still have little data or you are confused, then there is a small information panel at the bottom of the information circle, which is divided into four cells. The top two successively show the status (readiness) of the gun and the number of selected ammunition, and the bottom two show the total reload time and HP stock. That is, everything is displayed to the center of the screen, that you are less distracted, although it seems to me that it would be enough to indicate the reload time and readiness, without overloading the screen with excessive numbers.

In addition, the blue circle in the center is the circle of scattering of fragments, that is, the area in which the tanks fall into the sector of destruction, try not to confuse with the ellipsoid circle of information, since the first indicator is static (changes only depending on the type of selected ammunition), and the second is very dynamic and changes with the slightest oscillation of the sight.

You can also pay attention to the web of circles around the circle of fragmentation, which surrounds it - formally, each circle makes it possible to more accurately calculate the advance, but in fact - clutters the screen. At first, most players will get in the way of this, but then it will not distract you too much.

So, Taipan sight for WOT 1.19.1.0 is relatively simple at first glance, but at the same time it is a very informative sight, which possesses not only basic sets of characteristics and graphic components, but also a number of alternative (duplicate) parameters. Probably so, the author tried to make it interesting to a wide range of people, however, you choose, but in my opinion, in some elements it turned out to be overloaded with optional information and could be easier, which in general would make it a bit more convenient.