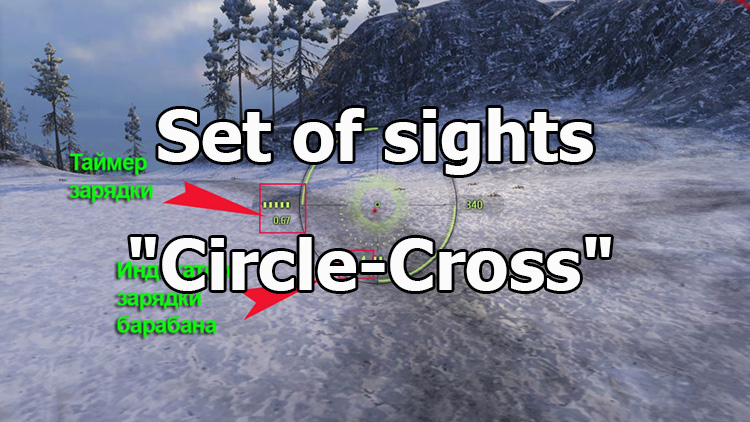 In this case, we will look at a rather simple, but useful Set of sights "Circle-Cross" for World of Tanks 1.17.0.1, which will expand the functionality of a conventional sight and allow you to act more effectively. 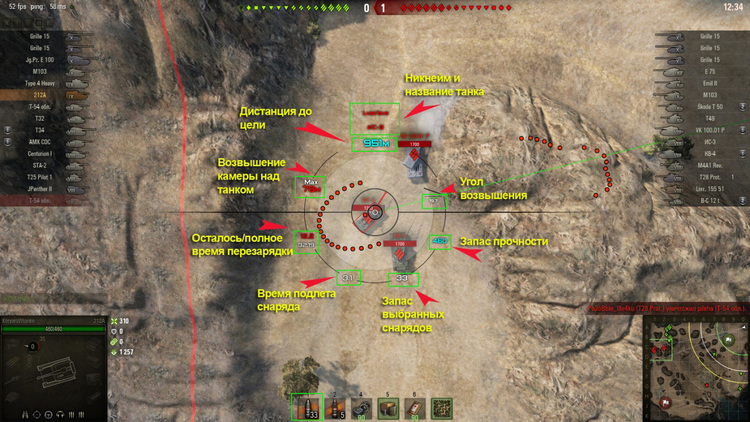 The SPG-sight is the very essence of this type of sights, since it is in this plan that the developers have done their best. Artillery sight seems to be the most thorough and intense part of this mini-mod, thanks to the abundance of information and thoughtful design.

Distance to the goal - this indicator informs you about how far the enemy tank is. This is useful when you are accustomed to intuitively calculate the time the projectile arrives at the target and build a shot at the advance on the basis of this data.

Projectile approach time - for those who do not like to calculate the approximate arrival time of the projectile in their head or simply want to know exactly how long the projectile needs to be in order to reach the goal. It is shown in seconds (up to tenths of a second).

The elevation of the camera over the tank is a popular feature in modern sights, in my opinion its usefulness is doubtful, but for some reason many creators of mods repeat this experience in their sights over and over again. In my opinion, it would be much more useful to put a small cost calculator at this place, so that players on artillery are not too keen on firing gold ammunition.

The safety factor of the tank - copies the above figure, useful for those who do not like to glance at the damage panel. In principle, in the SPG mode is not very useful, but when playing on the tank - you can save a couple of seconds in tense moments of battle.

Elevation angle - shows how much the instrument is raised. In principle, it is a useless feature, since the guidance goes automatically and we do not need to calculate the height of the obstacle, the trajectory, and so on, but for guidelines and statistics lovers, this is the point.

Nickname and name of the tank - tells you about what player you will shoot and what kind of tank in the sight. It will suit inexperienced players that they do not know how to recognize an enemy’s tank by profile, and for fans to beat extras (electoral fire). 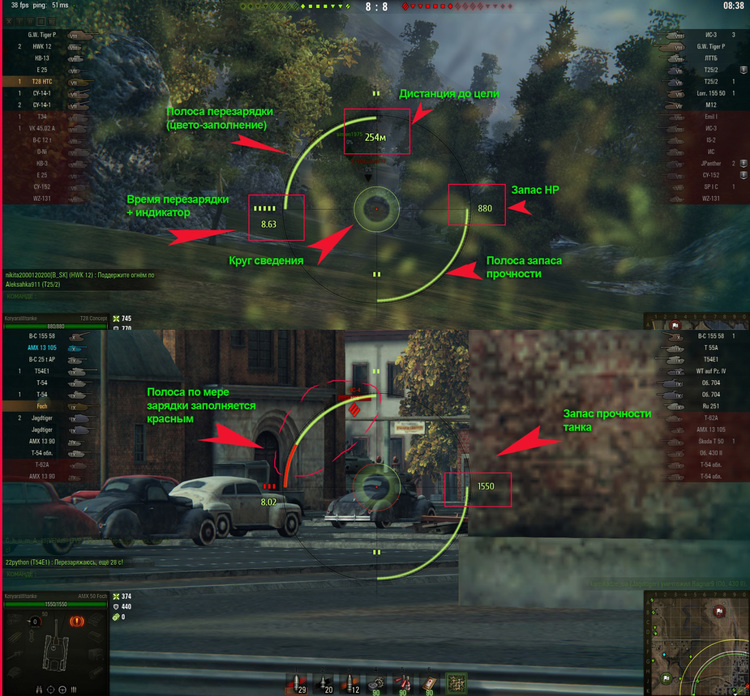 The arcade sniper scope is much simpler than artillery, so it will be easy to understand it after the above.

Distance to the goal - shows how many meters to the goal. It would be useful to know this unless tanks with a very slow projectile flight, such as British and American “howitzers”, SU-152, KV-2, etc., as it gives an opportunity to estimate what advancement should be taken for an accurate shot.

HP reserve - duplicates the indicator on the damage panel and allows you to save some time in tense moments of battle.

The margin of safety - in my opinion, this is the most informative part of the sight in comparison with the digital value of the HP, as it allows you to quickly and clearly disassemble how much of the HP left in your tank. It helps a lot in situations when a hail of shells hit you.

Recharge time + indicator - shows how much time is left and the total time to recharge. In addition to the digital timer, it is supported by an indicator that is filled (red) in divisions during charging, and when fully charged it is colored green.

Reload bar - also acts on the principle of filling with color. As it charges, the red bar rises, and when fully charged, the indicator acquires a light green color. Rather informative, but the indicator strip itself is very thin and there were moments that I could not recognize in time how much was left to full charge, which sometimes led to offensive losses (this point should be finalized by the modelers).

The differences of this sight, from the sniper mode are so minimal that you will not be difficult to understand the interface that in the review mode (normal), that in the sniper shooting mode. 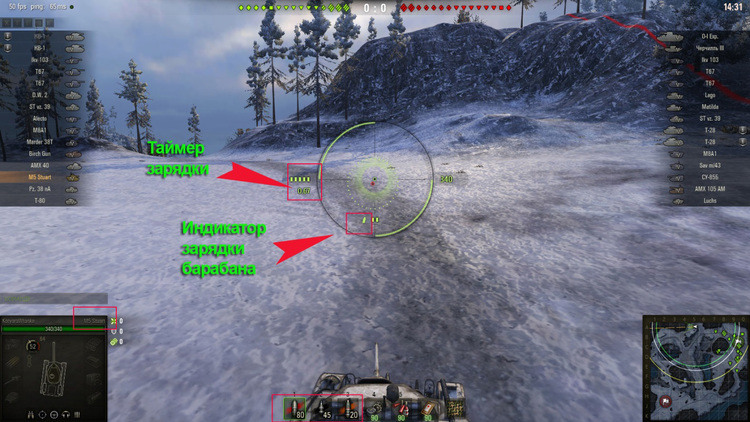 As you can see, the differences here are at least, so you should pay attention only to two more points.

Recharge timer - in the figure we have the M5 "Stewart" with a charging drum, the timer shows the recharge time inside the cassette, and when it ends, the countdown timer starts until the cassette is fully charged.

The drum charging indicator is similar to the segment tilted to the right (indicator), which, when fully charged, takes on a light green color. It allows you to quickly understand whether the cassette is full or not.

We have completed the review of the sight “Circle-Cross”, which can be translated as “circular-cross”. In my opinion, the sight is quite good, especially as regards the artillery regime, but the sniper-arcade mode, while not annoying the user with redundant information, needs to be improved. For example, the uninformative upper and lower segments are indicators, and the charging and stock band of the HP is too thin, which sometimes interferes during tense moments of the battle, as it does not make it possible to quickly assess how much is left before the gun is fully charged.