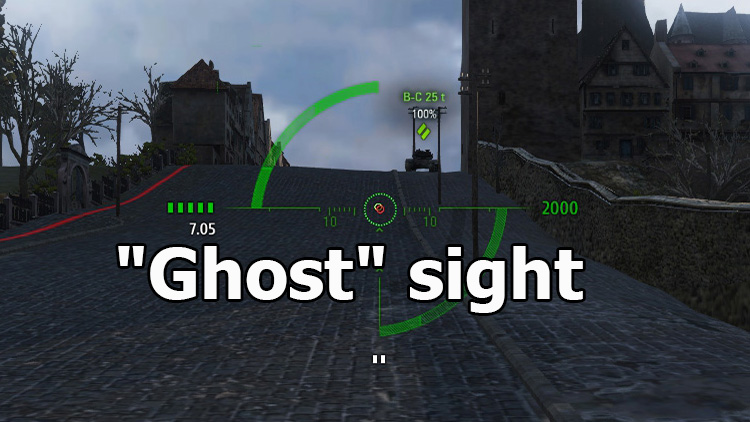 In this article we will look at the possibilities of "Ghost" sight for World of Tanks 1.19.0.0. The main features of the sight are simplicity, transparent indicators and a minimum of digital indicators. 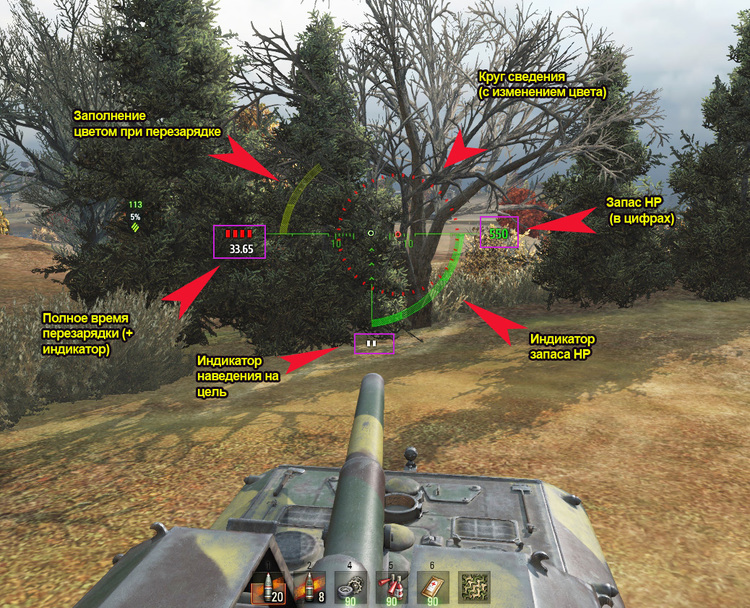 Fill color when reloading - the indicator in the upper left corner is filled with green color with a slight change in tone. It shows the degree of charging of the instrument, does not interfere with the review, but on the other hand, the transparency of the indicator sometimes prevents to understand exactly how much the instrument is charged. Under normal circumstances, it is uncritical, but in tense moments of combat, on maps with a large number of vegetation and a green tone, its convenience is greatly reduced, at least - it lacks contrast or at least a clear edging.

Targeting indicator - when aiming at a tank, additional quadrants are added to the existing quadrangles. In my opinion, the usefulness of this part is dubious and this feature is rather decorative.

The HP stock indicator is a simple (rounded) indicator that, when a tank is lost, the HP reflects this by the degree of filling the indicator.

HP stock in numbers - if you are not satisfied with the color indicator, that is, the digital value of the stock of HP. In my opinion, the font color is selected incorrectly and merges with the indicator color, there is no edging and it’s disassembled in the heat of battle, which is not possible, it’s easier to look at the damage panel. So authors should modify this element and increase the font size by one or two steps. 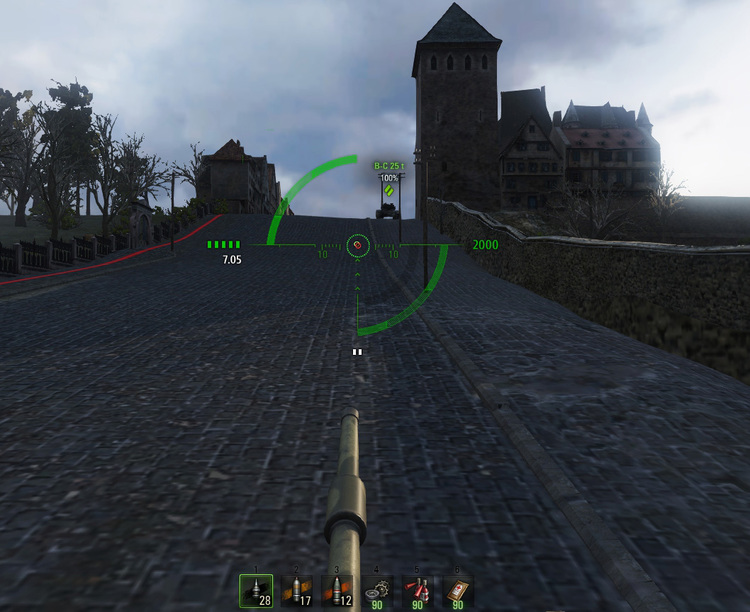 For more information, you should compare this figure with the above to represent what this sight looks like by default and in the process of reloading (pointing). 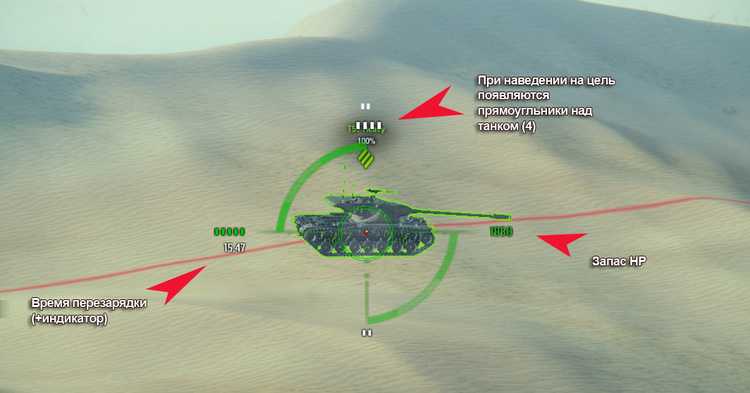 As you can see, there is not much difference between the arcade and sniper “Ghost” sights, as in some other types of sights, but, nevertheless, we will touch on the main points.

Recharge time - shows the total recharge time (it is the full one, the timer itself is static, and the recharge dynamics are reflected in a green semi-circle above). When fully charged, the rectangles are next to green, and when charging, they are red.

HP stock - shown in numerical value and duplicated on a semicircular indicator of safety margin, which not only has a different tonality in its length, but also changes color as the loss of HP stock. It is informative enough, but as mentioned above - on maps with a green tone and a large number of trees and bushes, indicators are poorly distinguishable from the general background.

When hovering on the target, additional rectangles appear above the target - as already mentioned, the decorative element is rather decorative than useful, as the guidance of the game toolkit on the target is confirmed by the appearance of a corresponding edging above the tank (green over ally, red over the enemy). However, as an additional decoration, it will fit perfectly. 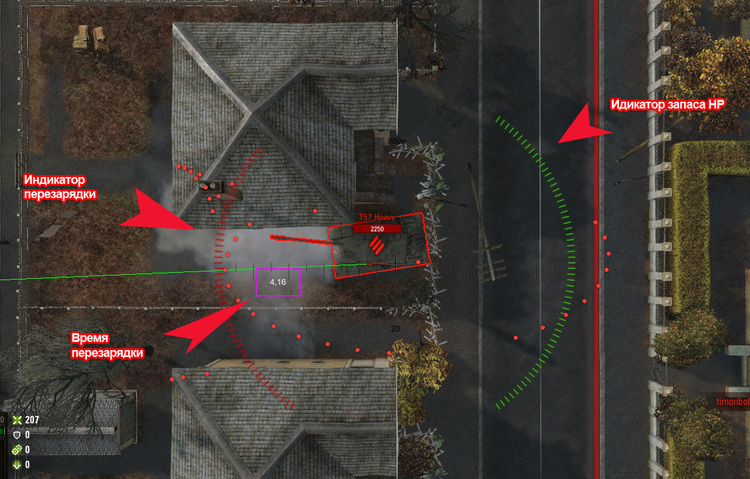 The recharge indicator - not much different from the standard one, is filled with divisions when charging, which, when fully charged, changes color from red to green. The color transparency at the same time helps to see the target better, but the charging process itself is difficult to see on the indicator, however, this is not so critical when playing the SPG.

The HP stock indicator is a similar indicator in the form of a semicircle, only it is less dynamic and changes its content as the tank loses its margin of safety.

Reload time - shows how much is left until the gun is fully charged (this would have been added to previous modes of sight).

In general, the “Ghost” art sight is not particularly different from the usual default sight for art sa, its design is somewhat different. Minuses - there is no time for approaching the projectile, there is no circle of destruction by shrapnels, if you look at the most useful additions in other sights (since the angle of inclination of the cannon and the like to it have questionable usefulness in combat). However, if the authors aimed at minimalism, then with this they did not lose.

The “Ghost” sight for World of Tanks can be attributed to fairly simple sights, not overloaded with unnecessary information. On the one hand, the functionality of the same arcade sight is quite enough, and on the other hand, the SPG-sight lacks some information content. However, this may be a plus for lovers of minimalism. It is impossible not to note the obvious drawbacks - even though the meaning of the sight comes from the title, but the authors are too carried away with “transparency”, and therefore some indicators are not always clearly visible, which should be added contrast and edging, and rectangles above the tank when hovering are generally more interesting features, rather than really useful. In general, the "Ghost" sight can be recommended to fans of minimalism, in addition, its simplicity will also not be able to adversely affect the performance in the game.