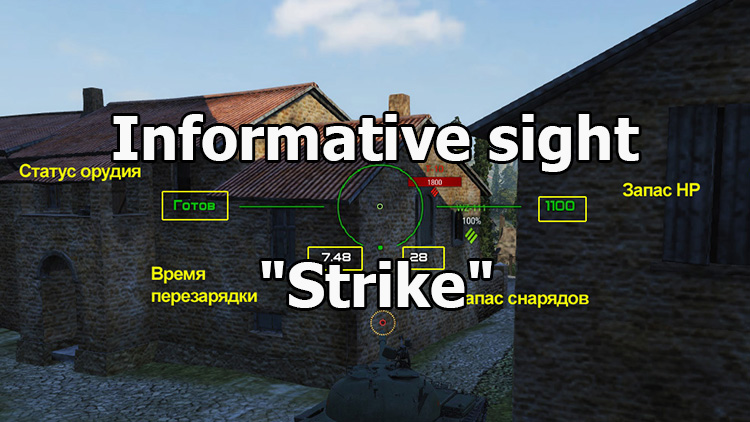 In this article we will talk about the green sight with the same name of the popular e-sportsman-tanker (Strike) - Informative sight "Strike" for World of Tanks 1.19.1.0. It has a fairly simple and intuitive interface and at the same time quite informative. Another plus of this type of sights is a good sight for gunners with all the necessary attributes. 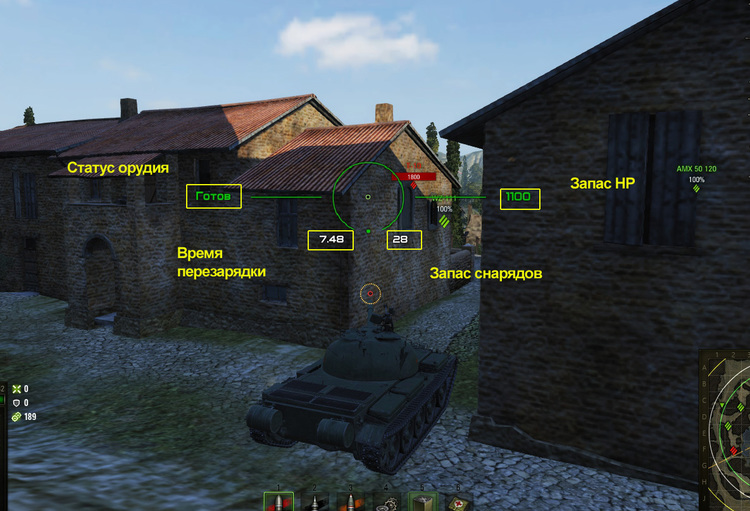 Gun status (ready) - the state of the gun at the moment, that is, whether it is ready for firing or recharging.

HP stock (1100) - shows what margin of safety for the tank at this moment, as the damage is received, the numbers change. 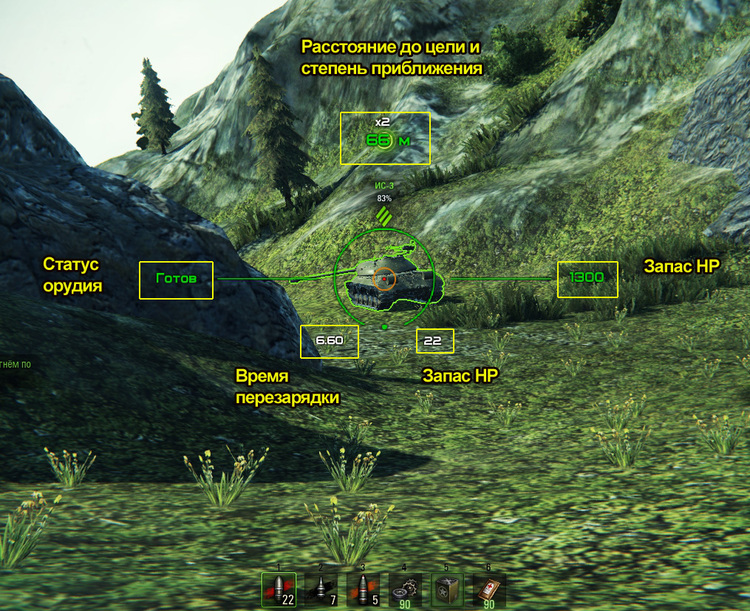 Gun status - shows whether the gun is ready to fire.

Recharge time - shows how many seconds are left before charging (while recharging is in progress), when the gun is charged, then the average time of full charge is shown until the next shot.

The stock of shells - shows how much of the shells left of the selected type (helps to spend less time getting important information, switching the view to the instrument panel).

HP stock - shows how much strength is left in the tank, as the damage is received, this indicator changes.

Characteristics of the gun - shows that the type of gun currently installed on your self-propelled gun, what is its caliber, the name of the munition, its mass (kg) and flight speed (m/s).

The distance to the goal (414m) - shows how many meters to the goal, it helps to approximately determine what to take in advance.

Player's nickname and tank name - shows the player's name in the game for which you are aiming, as well as which tank in the sight.

The angle of elevation (declination) of the gun - shows how many degrees the gun is raised, usually this figure is small, since the range of fire is limited to a kilometer, and in fact, such SPGs could fire at a distance of more than 20km.

HP reserve - shows how much HP your tank has at the moment (safety margin).

The stock of shells - shows how much of your chosen type of ammunition remains.

Remaining before charging and total reload time - shows how much is left before charging (if the shot has already been fired, if not, the readiness of the gun is shown), and also below is a static indicator of the total time the gun was loaded (reminder).

At this time, we can say that all the main advantages were concluded in this sight - good contrast, no excess elements in the sight, such as long signatures or incomprehensible figures and indicators. For the artillery sight, the authors generally tried very well, so that we got access immediately to the full-fledged sight, which was created on the basis of the best practices in this direction of modifications.

Folder mods placed in the folder World of Tanks.