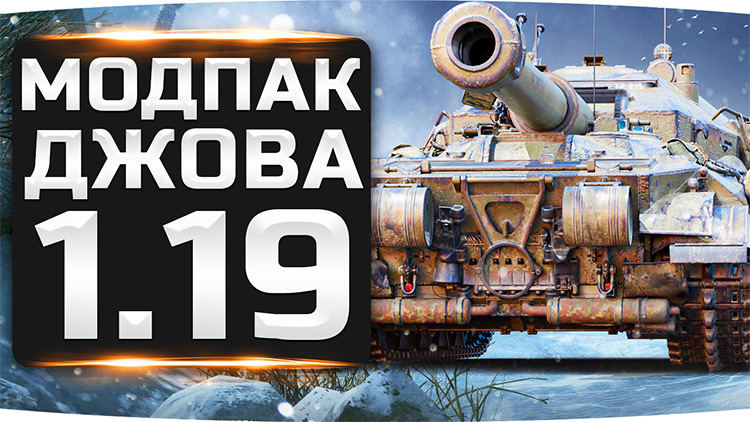 An expanded version of "Jove modpack for World of Tanks 1.19.1.0", one of the most famous video blogger and streamer in the community of World of Tanks, is presented to your attention. This modpack is an excellent and versatile choice for most players, always combining the most up-to-date versions of the most popular and useful mods for an effective and comfortable game, as well as useful add-ons and programs such as Wot Tweaker Plus and mods for streaming on twitter and replay management.

Being one of the most stable assemblies for a long time, Jove modpack has earned a large audience of admirers due to its stability and balance. With the release of each new patch, programmers do a lot of work on testing and optimizing mods for the new version of the client, so that by the day of the update release, players will receive a quality package with everything needed for a comfortable game on any hardware. If any problems arise, edits are carried out very quickly, which is also important.

The assembly as always includes the most convenient and balanced sights from the best bloggers and streamers - Jove, Amway921, Murazor, Vspishka, Desertod, as well as other modifications. Among them are the futuristic sight Ghost Recon, the super-informative sight from MeltyMap, the Taipan artillery sights, and also modifications for the circle of convergence with the angle of entry of the projectile or animation, of your choice. And the adjustment of the range finder, the calculator of your armor and the direction of the enemies' trunks on the minimap greatly increases the effectiveness of your fire. For the most effective appearance it remains only when installing modpak to choose white textures for corpses and knocked down tracks, color informative decals from hitting projectiles and skins with breakout zones, which in the alternative mode will be displayed only when hovering or by pressing a key to not spoil visual sensations from the game when their help is not required.

There are also long-beloved mods, such as dashboards for enemy tanks, an increase in the display time of the Sixth Sense icon with a sound countdown to choose from, disabling random shots at allies, dynamic camera shake and mud in a sniper scope. It is not for the first year that the NoScroll mod, which does not allow the scrolling mode to enter and exit with a sniper mode and a commander’s camera mode, gives particular convenience in battle, allowing you to look at and evaluate the situation on the battlefield down.

With the hangar modifications, there is also a complete order - nothing superfluous and exceptionally useful and beautifully designed mods: a 2-3-4 row tank carousel to choose from, a ping server in the hangar, remembering the last server, a clock in the corner of the screen and displaying game statistics for a session or for a day that will allow you to keep your average damage and winrate under control. Also, there are more detailed descriptions for skills and abilities - like a trifle, but nice.

The creators of this assembly have tried to satisfy most of the demands and needs of the audience, including in the kit not only useful modifications that improve the informativeness of the interface in battle and the appearance of the game, but also add-ons that improve performance on weak machines. An excellent helper in this matter will be the well-known program Wot Tweaker, which allows you to turn off extra effects in battle, such as flashes from shots or smoke from the burning bodies of fallen tanks. Of course, such actions will make the picture less attractive in a battle, however, they will give a pleasant increase in frames per second and, as in the case of smoke shutdown, they will make it easier to target the enemy behind cover in crucial moments.