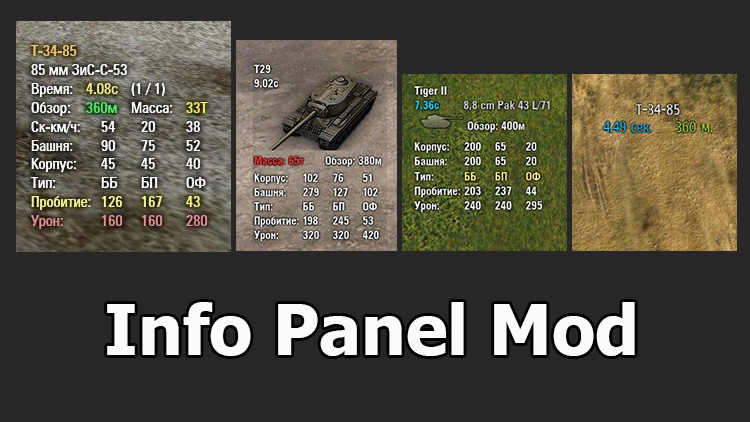 The modification presented to your attention is widely known and has gained considerable popularity in the tank community due to its simplicity and functionality. Each player is able to choose an option here for themselves, according to their requirements and wishes. Moreover! Info Panel Mod for World of Tanks 1.16.1.0 (display of information on vehicles) has finally been completely rewritten with changes in the structure itself, so that from now on it will work fine with any sight!

The information panel is a window that appears on the screen when you hover the sight on the tank of another player and displays all the necessary characteristics of the machine in battle. Among them, both the name of the tank, and the installed weapon, its reload time, information on the armor and the radius of the tank, as well as the average damage per minute and the level of armor penetration.

Three variants of this information panel are well known to players who use modpacks from famous authors. This is a simple panel, a color panel and a minimalistic panel that displays only recharging and a review of the car. Each of them was created for its audience and has long gained popularity among tankers. Someone likes to get maximum information about the enemy's tank, study it in battle and analyze it, but someone needs only to know the radius of view and reload time to know in battle when and how close you should approach the enemy.

How to move the panel?

If the panel on the screen is displayed incorrectly, then you can change its position by holding down the CTRL key and dragging it with the mouse.

Install additional configs only after installing the main mod.