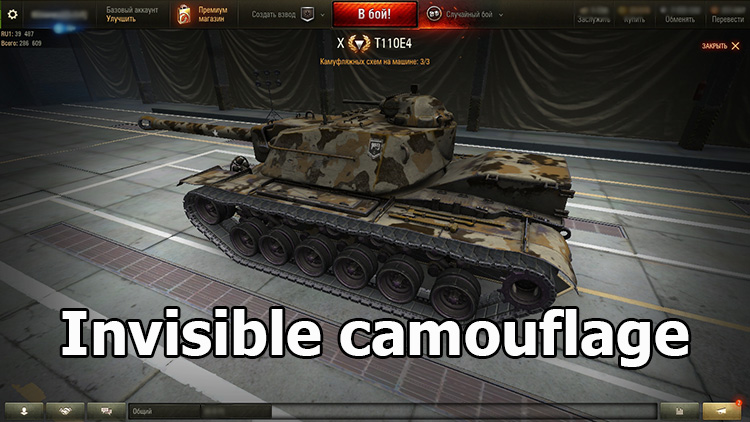 Provided to your attention at this time the mode "Disabling camouflage on tanks" for World of Tanks 1.15.0.2 is somewhat unusual and original, because it does not add elements to the game interface and does not expand the choice of camouflage or skins for tanks and hangars, but vice versa , makes all camouflage on the technique in the game invisible! This is a very narrowly specialized modification created for an audience of players who themselves know why they need it. Most likely, the presented mod will be of interest either to players who fundamentally dislike camouflage and decoration on tanks, or players who use many custom skins for tanks that are camouflaged by camouflage or modifications that conflict with camouflage.

In any case, this mod is made very high quality and performs its task well - after copying files into the game client, all camouflage, emblems and inscriptions become transparent and the tanks are displayed in their original form, both yours and all the allies and opponents tanks. At the same time, the performance of this modification is checked with the release of each new patch and, if necessary, is optimized for functioning in new realities without any problems. In addition, the creators are also checking the interaction of the “Disabling camouflage on tanks” mod with other modifications, so you can be sure of the stability of the client after its installation.