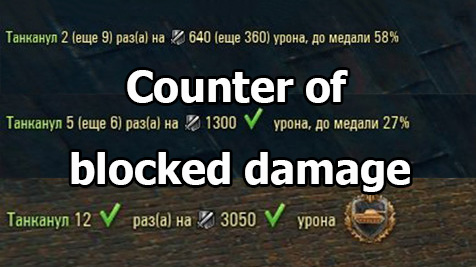 One of the versions of World of Tanks that are really popular in the tank community, without which it is really not comfortable to play, are calculator modifications that calculate the damage inflicted and received. Among them, the Counter of blocked damage mod for World of Tanks 1.15.0.2 is especially popular, designed to account for blocked damage for potank lovers and owners of heavy tanks to a greater extent.

This mod displays in battle the approximate amount of damage you hit in real time, which is sometimes incredibly convenient! After all, getting a medal or performing personal combat missions sometimes depends on this amount! Players no longer need to wait for the end of the battle and climb into the post-battle statistics to find out their success in this area. Additionally, the mod considers the achievement "Steel Wall".

This modification exists in the design options from Ekspoint and PROTanki.

For the same players who are not satisfied with the standard appearance of this modification - there is always access to the configuration file, where with the help of notepad everything can be customized.